”ART’s loan enabled me to open my own restaurant a lot sooner than I would otherwise have been able to.”

Glynn Purnell, a Brummie chef whose adventurous and innovative cuisine won him one of the city’s first two Michelin stars in 2005, was eager to start up his own restaurant – Purnell’s.

Glynn had a promise of funding from his bank, but it was not quite enough. ART stepped in to make up the total with a loan as part of a finance package.

From the day it opened Purnells took gourmet eaters by storm. Set on a corner in a Victorian building, the contrasting chic contemporary interior provides a perfect setting in which to experience Glynn’s bold and exciting dishes.
Winning the regional and national heats of the popular Great British Menu competition, featured on BBC 2, a year later propelled Glynn into the limelight and his reputation as a celebrity chef continues to grow. His winning dessert from that competition – marinated strawberries with tarragon and black pepper honeycomb, with burnt English cream surprise – was described as ‘sexy’ and ‘orgasmic’ by the judges and is typical of the combination of unusual flavours which characterise Glynn’s cooking. 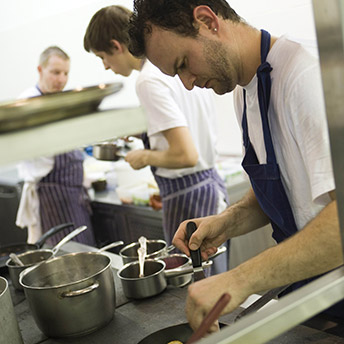