“ART was really easy to deal with, which was unexpected when it seems to be so hard to even get an overdraft from a bank!”

Michelle Henry is a fourth generation sign-writer and the proud possessor of a book her great grandfather published in 1896 called ‘How to Write Signs, Tickets and Posters’.  Not that she was aware of that when she set up HNS Signs in 2010.  She knew her grandparents had run a sign-making business and that her Mother had worked in the office for them, but not wanted to take over the business.  Michelle herself studied Law at University and then set off to work her way around Australia.  Without previous coffee-making or cocktail-making experience, she discovered that it was easier to get a job working for a sign-maker, where she was able to utilise the skills she had developed as a child making signs for her own and her friends’ bedrooms under the tutelage of her grandparents.  “I fell back in love with sign-making,” she says, “and decided to get a job doing that when I got home.  It was only recently that I discovered sign-making goes even further back in the family than my grandparents, to my Mother’s ‘Granddad Hazlehurst’.”

When the sign-maker Michelle was working for went into administration, she decided to buy the assets and set up her own business.  She used her own savings and a grant from the Prince’s Trust to get started and initially shared premises, and the rent, with another company.  When that company moved out she decided to stay put and expand.  “I wanted to invest in equipment to bring more jobs in-house, where I could have more control over them,” she explains.  I met Central Finance at a networking event and they helped me to get a business plan written up and introduced me to ART.

“I submitted my business plan to ART, had an interview to talk through the plan and the figures, the loan was approved and the money came through.”

Michelle invested the money in a computerised cutter, which makes things like built-up letters, folded trays and wooden routed-out signs, and a wide format digital printer, which makes things like wallpapers, stickers and vehicle wraps.  “That was a year ago now and they have made such a difference,” Michelle enthuses.  “We were able to take on more work and consequently more staff – two interns and two apprentices – as well as give a permanent job to an existing intern.”

All around the walls of HNS Signs there is evidence of the creative uses to which the company puts its machinery.  “We aim to use our equipment differently to other people,” Michelle explains.  “We were short-listed for a FESPA award in Germany for some branding work we did using one of the machines we bought with our loan from ART.”

Looking ahead, Michelle has further plans for expansion – possibly elsewhere in the UK, possibly even to Australia or New Zealand in time.  She is optimistic about the future and says she would definitely to back to ART for a loan to support her growth plans. 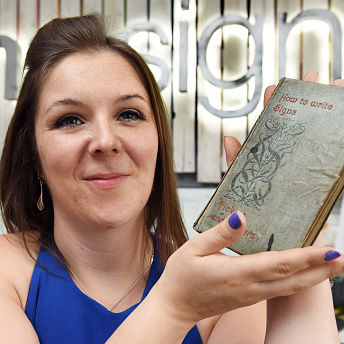 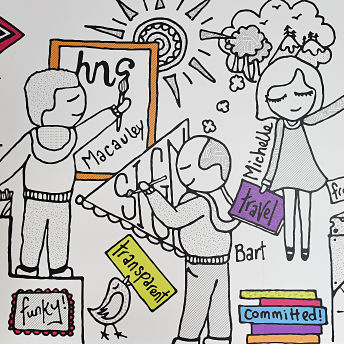