“The ART team was fantastic. They were lovely people and really helpful. They were interested in the business and the money we needed came through promptly.”

Newey & Bloomer has been making Simplex solid copper whistling kettles since 1903.  The business was acquired by the Sheppard family, including husband and wife Lee and Lisa Sheppard and Lee’s brother Mark, in 2005 when the previous owner wanted to sell.  Faced with soaring copper prices and an economic downturn, the family decided to cease manufacture in 2010 and the Simplex kettle began to be made under license elsewhere.  “People still had our contact details,” says Lisa, “and after a while we began to get complaints about the kettles.  Manufacture had been put out to the Far East by the licensee, which resulted in an inferior quality product and that was damaging the reputation of this beautiful, historic kettle.  We couldn’t bear it and decided to take action.”

Taking action turned out to be expensive and time consuming as the licensee did not want to stop selling the kettles.  “It cost us a lot to get the license back,” says Lisa, “and we also had to register the trademark in countries all over the world to stop inferior rip off versions being passed off as the genuine article.”

It was the Sheppards’ accountant who recommended approaching ART Business Loans when they were looking for money to help rebuilt the reputation and customer base for the hand crafted high quality Simplex range of kettles.  “We started by applying to our bank for an overdraft,” says Lisa, “but because the company had been dormant for a number of years, it was treated as a new business and we were given a resounding ‘no’ to that or a loan.  The ART team was fantastic.  They were lovely people and really helpful.  We gave them the paperwork then met at their offices.  They were interested in the business and the money we needed came through promptly.”

The Sheppards used the loan to fund new packaging, marketing materials and attendance at key shows to meet the buyers.  “We needed to tell our story and reassure them that the kettles we were offering were as they had always been,” says Lisa.  “The Simplex kettle really is a premium product.  There are 10 operations needed just to make the spout!  Our biggest market is the United States, where Simplex is THE kettle to have.  They don’t really have electric kettles there at all.  Coffee makers are electric, but a kettle goes on the hob. We are also now breaking into the Japanese and Australian markets where the kettles are proving very popular.”

Thanks to the family’s efforts, the Simplex kettle is not only regaining its reputation, but finding favour with new customers.  If you want to buy one in this country, you will now find them in the new tea salon in Fortnum and Mason and online from the Newey & Bloomer website. 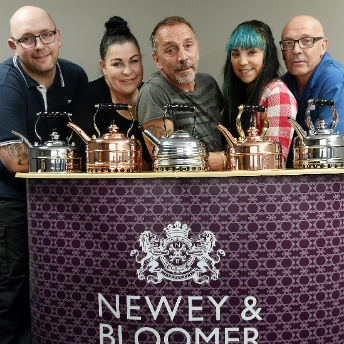