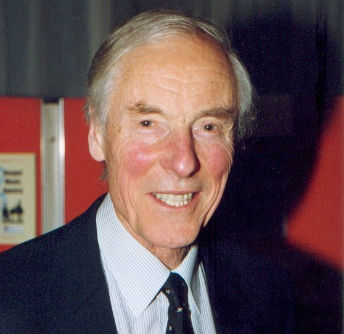 It was with deep sadness that the Directors, former Directors and Staff at ART Business Loans learnt of the death of Sir Adrian Cadbury on 3rd September, aged 86.  It was a report from the Aston Commission, Chaired by Sir Adrian, which heralded the start of ART (Aston Reinvestment Trust) – a new type of finance provider, designed to raise money from social investors to lend to local businesses enabling them to create or protect local jobs for local people.  Sir Adrian became ART’s founding Chairman in 1997, then President in 2004, a post which he still held at the time of his death.

“Sir Adrian was an astute businessman guided by a strong moral compass,” says Steve Walker, Chief Executive of ART, who has worked alongside Sir Adrian since the outset, helping to develop the model for ART as a Community Development Finance Institution (CDFI) then set it up and run it.  “He was a great enthusiast when it came to business and loved to talk to entrepreneurs, business owners and managers about their ideas and plans for growth,” continues Steve, “but he was also a philanthropist and encouraged others to follow his example in giving something back.  His energy and powers of persuasion were crucial in securing the seed investment which allowed ART to get started.  Typically of Sir Adrian, he didn’t abandon the enterprise once ART was up and running, but remained in close contact always encouraging us and interested in how we were performing and meeting the challenges of a changing marketplace.”

Sir Adrian was ahead of his time in encouraging companies and individuals to invest in ART, with no promise of a financial return, just the knowledge that their money would be put to good use.  It would enable businesses which did not meet the banks’ criteria for a loan to access the finance they needed to start up, grow, survive cashflow problems or invest in diversification to meet changing market needs.  “We’ve seen a huge growth in the appetite for that kind of investment in recent years,” says Steve, “but it was a new concept when Sir Adrian went to speak to his colleagues, friends and associates about it in 1996/7.”

“Without Sir Adrian, ART – and indeed the CDFI sector which we have helped to build – wouldn’t be where it is today.  He was always a friend and everyone at ART will miss him greatly.”