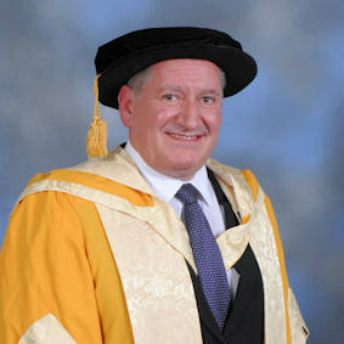 Craig Errington, Chief Executive of Wesleyan Assurance Society and Chair of ART since September 2011, has received an Honorary Doctorate from Birmingham City University (BCU) in recognition of his contribution to the finance sector.  He was presented with the award during a ceremony held at Birmingham’s Symphony Hall on 1st September, which also honoured graduates from the University’s Faculty of Business, Law and Social Sciences.

Speaking after the ceremony, Craig said: “I am delighted to receive this award from one of the city’s finest educational establishments.  BCU has a thriving business school and the work they do in preparing students, giving them a vital sense of innovation and inspiration, is essential to the development of businesses in the UK.  It was a privilege to be given the opportunity to talk to the graduates as they embark on their careers.  I wanted to explain to them that there are always opportunities in business, even in the toughest of times.”

Craig became Chief Executive of Wesleyan in 2005 and has helped the mutual, which provides tailored financial advice and products to professional groups including doctors, dentists, lawyers and teachers, to continue to grow in spite of the economic downturn.  In 2014 the assets under Wesleyan’s management were valued at more than £6 billion and its operating profits were £40.3 million.  Craig attributes this to its mutual status, which he says enabled Wesleyan during the recession to make long term decisions while other companies had to react to short term circumstances, driven by the demands of their shareholders.

ART Business Loans is also a mutual, owned by its members – both borrowers and investors – and has seen its turnover almost treble during the time Craig has been Chair.